At the entrance to the village of Redstone, several monuments have been erected.  One of them is a World War Monument and the others are to commemorate the quarry.

From our history page about these monuments…

As of the Fall of 2014, through the sustained efforts of the Redstone Commemorative Committee and the support of the town of Conway, local funds were raised to finance the placement and engraving of several historical granite markers. Thanks goes to Storyland in Glen and to Coleman and sons in Conway for the donation of the green and pink granite. Engraving was completed on site for a nominal fee by Arthur’s Memorials of Redstone. The large green and pink stones weigh roughly 4&1/2 and 7&1/2 tons respectfully. The green polished slab is engraved with significant timeline dates and depicts a quarry derrick. The pink block is engraved with a brief history of Redstone and a carving depicting the original large wooden stoneshed. And much to the joy of the local “old timers” there is a stone engraved with WELCOME to REDSTONE VILLAGE
ESTABLISHED cir.1884 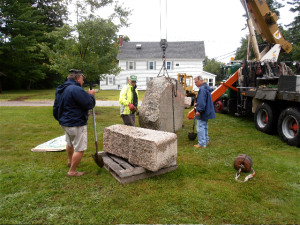 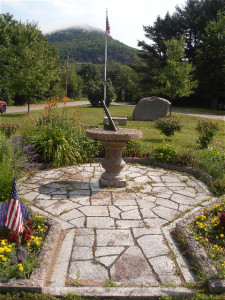 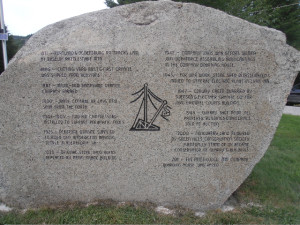 Monument at the entrance to Redstone. Courtesy Steve Swenson Collection.